Obituaries
Margaret Flotell Knight
September 23, 1929 - November 10, 2014
Margaret Flotell Knight was born on September 23, 1929 in Oklahoma City to Edna Mae (Clark) Lingenfelter and Forrest Merle Lingenfelter, M.D.  Margaret passed from this life peacefully on Monday, November 10, 2014 with her beloved daughters and husband at her side.
Margaret was one of the first female graduates from the University of Oklahoma Geology Department.  She was a member of Phi Beta Kappa.  Margaret worked as a geologist, real estate agent, tax accountant and was a published author.  She lived in Okmulgee for many years where she started the Okmulgee Service League, which contributed so much to the small town, including creating a teen center.  Margaret enjoyed golf and won 5 Okmulgee Country Club championships.  She served on the Okmulgee Hospital Board.  She met Al Knight who was representing Okmulgee Hospital.  She always said “He won the lawsuit and won my heart.”  She subsequently moved and she and Al spent many happy years in Sperry, OK on their ranch.  Eventually they moved to Tulsa.  Margaret, who was always interested in contributing to her community, subsequently served as President of the volunteer group at the Gilcrease Museum or Gillies.  Margaret and Al established the Alyson Marie Knight Memorial Endowed Scholarship that created a legacy that provides an educational opportunity for Rogers State University students.  They received the Presidential Salute in 2009 from Rogers State University for all of their support.  Margaret was always interested in making things better – whether it was herself, her family or the community.  Always serving and contributing, she was willing to work hard to get things done.  She was a firm believer that education was the way to success.  As she once said, “We’re delighted to give a helping hand to RSU students because you can’t succeed in this world without an education.”  Margo and Gwen say it was their parents who gave them the vision to become physicians.  Women physicians in the early 70’s were very rare.  Advanced education was an expectation for all their children.  Being a spirited, lively personality, she never gave up on any project.  Always being able to laugh at herself was one of her great personality traits.  She was a generous and loving mother and wife.  She will be missed so much by her family and friends.
She was preceded in death by her parents, her sister, Mary and granddaughter Alyson Marie Knight.  Margaret is survived by her beloved husband of 44 years, Alfred Bishop Knight; her brother, Robert Lingenfelter; daughters, Margo Uri Simmons, M.D., Bobbie Gwen Uri, M.D., sons, Alfred Knight, Jr., M.D., James P. Knight, Ph.D, Grover Earl Knight and Mary Beth Knight; grandchildren, Leslie Simmons Pierson, Greg and Tony Minardo, Meredith, Jordan and Brian Knight and Laura Snyder.  Great grandchildren, Margo, Demi and Hunter Pierson, Owen and Brandy Minardo, Hannibal Windler, Paige, Liz and Tyler Snyder; nephews Larry and Mike Neal and numerous cousins.
Service 10:00 A.M. Thursday November 13, 2014 at Memorial Park Cemetery Chapel, 5111 South Memorial Drive, followed by a graveside ceremony with receiving of friends and family at the home of Mr. Al Knight, 3409 East 58th Place, Tulsa from noon to 3PM.
Ninde Brookside Chapel 918-742-5556.

Michael L McCarty, MD
January 18, 1955 - November 6, 2014
Michael L. McCarty, 59, of Grand Island, NE died Thursday, Nov. 6, 2014, as the result of a fatal plane crash in Paulding County, Ohio.
Memorial services will be held Saturday, November 15, 2014 at 11:00 AM at St Mary’s Cathedral, Grand Island, NE with Reverend Richard Piontkowski officiating.   Reception and dinner to follow at St. Mary’s Parish Center.    There will be no visitation.  Inurnment will be at a later date.  Apfel Funeral Home is assisting the family.
Dr. McCarty was born to John McCarty and Frieda Faye Neth on January 18, 1955 in Hastings, NE.  Starting at age 7 Dr. McCarty started  working to help contribute to his family which lead to the work ethic and success in life.  All the time knowing Dr. McCarty this was the only thing I ever heard him personally take pride in.  He graduated from Hastings High School in 1973.  He then graduated from University of Nebraska at Lincoln in 1976 where he was PHI Beta Kappa and University of Nebraska Medical Center in 1981, with high distinction.  He finished a residency in Orthopedics Surgery in San Antonio, Texas in 1986.  With all these in accomplishments he had many influential figures.  One of the most influential being Ralph Phelps, who had a tremendous effect on his character, and who he was as a man.  On August 1st 1975, Michael married Deborah Phelps, his high school sweetheart who he had been with since the 7th grade and to this marriage were born four children.
Dr. McCarty practiced in Okmulgee, OK in 1986-1990; he practiced in Grand Island, Nebraska at Central Nebraska Orthopedics until the present time, practicing in Grand Island, Hastings, Broken Bow, Lexington, Holdrege and McCook.  Dr McCarty had many interests such as flying, grilling, gardening, swimming, travel, the Huskers and all sports especially following all the community kids. Most of all he cherished his children, grandchildren, nieces, nephews and siblings. Dr. McCarty served on two medical mission trips to Haiti with Grace 4 Haiti Medical Mission, of which his son Ryan accompanied.
Dr. Michael McCarty is survived by his father John McCarty of Grand Island, NE; sons Michael (Jade) McCarty, Okmulgee, Ok and Ryan McCarty of Durham, NC, daughters Kelly McCarty of Dallas, TX and Kristy McCarty, Hoboken, NJ.  Sisters Kim Gangwish, Grand Island, NE and Marlene (Lynn) Casey, Overland Park, KS; brother Jack (Renee’) McCarty, Lincoln, NE, Dan (Judy) McCarty, The Woodlands, TX, and  Kevin McCarty, Lincoln, NE, Grandchildren, Kennedi and Kaiden Grimes, Dallas, TX and Caitlin McCarty, Okmulgee, OK. and 12 nieces and nephews and their children as well as many other relatives and numerous friends.
He was preceded in death by his grandparents Mr. and Mrs. John A McCarty and Mr. and Mrs. Raymond Neth as well as his mother Freida Faye (Neth-McCarty) Brooke and stepfather Robert Brooke and stepmother Val McCarty and infant brother Thomas Keith McCarty.
In honor of Mike, instead of flowers, please make memorial contributions to: Grace 4 Haiti Mission or Hastings Nebraska YMCA.
Online condolences may be directed to the family at www.apfelfuneralhome.com.

Charles Vaughn
Charles Vaughn, 71, a a resident of Okemah, died Friday, November 14, 2014 in  Tulsa, Oklahoma.
Arrangements  are pending with the Integrity Funeral Service of Henryetta.

Gary Paul Bivin
December 12, 1947- November 10, 2014
Gary Paul Bivin, age 66, passed away on Monday, November 10, 2014 with his family by his side.  He was born on December 12, 1947 in McAlester, Oklahoma to Grover and Lenora (Hathcoat) Bivin.
Gary graduated from Okmulgee High School in 1966 and from Northeastern State University with a Master’s Degree. Gary began his lengthy and distinguished career in education at West Junior High in the 1970s, where he also coached football and oversaw the student council.  He served as Assistant Principal at Muskogee High School, Principal at MAPS and Principal at Muskogee High School, retiring in 2010.  Gary was in his first year serving as a board member of the Muskogee Board of Education where he continued to touch the lives of everyone in which he came into contact. Gary married Judy Marchant on January 12, 1974 and will be remembered as a loving and devoted husband, father, and grandfather. Most important to his heart, Gary enjoyed spending time with his family, watching his grandchildren play sports and cheerleading or spending time at the lake. He and Judy raised their family as members of First Baptist Church in Muskogee. Gary was an active member in Muskogee Optimist Club.
Gary was preceded in death by his father, Grover Paul Bivin.  He is survived by his wife, Judy; daughter, April Buck of Bixby, OK; son, Shane Bivin and wife Eden of Springdale, AR; grandchildren, Jack Buck, Joe Buck, Lainey Bivin, Tyson Bivin; mother, Lenora Bivin of Okmulgee, OK; brother, Dwain Bivin and wife Rose Ann of Okmulgee, OK; sisters-in-law, Brenda Turner and husband Bobby, Pat Cindle and husband Bill, Beverly Martin and husband Dan; as well as many nieces, nephews and other relatives.
A funeral service celebrating the life of Gary P. Bivin was  held at 11:00 am, Thursday, November 13, 2014 at First Baptist Church of Muskogee with Pastor Kelly Payne officiating, assisted by Bobby Jefferson.  Burial followed at Okmulgee Cemetery with Bobby Jefferson, Bill Beach, Terry Landrum, Billy Yocham, Bruce Ragsdale and Earl Garrison serving as pallbearers.  Honorary pallbearers were Dan Hall, Joe Kennedy, Scott Schroder, Robert Kelly and Gene Prado.
The family has entrusted Bradley Family Funeral Service with the arrangements.  Friends may send condolences to the family at www.bradleyfuneralservice.com

Patches Leigh-Anne Campbell
March 24, 1993 - November 13, 2014
Patches Leigh-Anne Campbell, a resident of Beggs, died Thursday afternoon, November 13, 2014 in Beggs at the age of 21.  Patches was born March 24, 1993 in Pryor, Oklahoma.  She moved to the Beggs area in 2009 and attended Beggs High School her Junior year and graduated from Mounds High School the following year.  Patches enjoyed playing softball and was involved in FFA.  She was a loving and caring person who would do anything for anyone.  She had worked at Beggs General Store and was currently employed at Arbor Village as a CNA.  She was preceded in death by a grandmother, Emma Jane Campbell.  Survivors include her mother and dad, Melena (Guss) Wilson and Bobby Wilson, her father, Stephen Craig Campbell and wife Sheila, her children, Bentley Matthew Catalan and Haeleigh Mae Catalan, a brother, Chase Campbell, grandmother, Doris Tharp, father of her children, Steven Catalan, step-grandmother, Deanna Wilson, half-siblings, Mickel Johnson, Chad Campbell, Cory Campbell, Stephen Campbell, Derrick Sparks, and Mandy Campbell, step-siblings, Amber Welker, Ashley Brashears, Cole Wilson and Bobbi Jo Wilson and many loving friends.  A Service to Celebrate Patches’ Life will be held 2:00 P.M. Tuesday, November 18, 2014 at the Crossroads Baptist Church in Beggs with Pastor Travis Markes officiating.  Friends may visit the funeral home on Monday from 1:00 P.M. – 6:00 P.M.  Arrangements and cremation services are under the direction of the McClendon-Winters Funeral Home of Beggs. 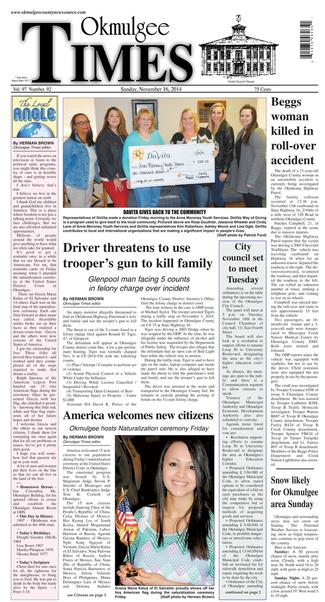