Roger Leroy Curran
Roger Leroy Curran, a resident of Okmulgee, passed away Sunday, September 7, 2014 at the age of 59. He was born December 28, 1954 to Claude M. and Louella (Anderson) Curran in Wichita, Kansas. He served in the Oklahoma Army National Guard for 18 years, the United States Army for 3 years and served as a Sergeant at the time of his discharge. He was a member of the Second Baptist Church in Okmulgee.
He was preceded in death by his parents, Claude M. Curran and Louella Bunker and daughter, Tiffany Anita Curran.
Survivors include his children, Diana Curran of Okemah, Eric Curran and wife, Kasey of Sapulpa, Jennifer Curran of Shawnee and Johnny Curran of Okmulgee; sisters, Yedevieve Crook, April Curran, Faith Eastman and Cheryle Curran; brothers, Daniel Curran, Michael Curran, Robert Curran, Samuel Bunker and Edwin Bunker; two grandchildren, Crystal Marie Mineam and Erika Rose Curran and other numerous relatives and friends.
Memorial Services will be held at 10:00 a.m. Wednesday, September 17, 2014 at the Jackson Funeral Home Chapel in Okmulgee with Pastor Steve Gallagher officiating.
Military Honors will be conducted by the Oklahoma Army National Guard and the Patriot Guard Riders.
Services are under the direction of the Jackson Funeral Home and Crematory in Okmulgee.
Friends may send their condolences to http://www.jacksonfhandcrematory.com/

PATRICK WAYNE REYNOLDS
Patrick Wayne Reynolds died in Tulsa September 9, 2014 at 43 years of age.  Patrick was born August 24, 1971 in Borger, Texas to Patricia Irene (Holden) and the late Roy Cordell Reynolds.  He enjoyed music and played the drums.
Patrick was preceded in death by his father, his grandparents and aunt Charleen Shelton.  He is survived by his mother and step-father Pat Reynolds-Ferguson and Boyce Ferguson, seven children: Jennifer Thomas, Jeremy Reynolds, Jessica Reynolds, Sharron Reynolds, Gabriel Reynolds, Jade Reynolds and Frankie Reynolds, one brother Roy Cordell Reynolds, Jr., two nephews: David Tyler Reynolds and Dylan Reynolds and a great aunt Kathleen Kelly.
A memorial service will be held on Tuesday, September 16, 2014 at 4:00 P.M. at the Jubilee Christian Center. Memories, condolences, photos and videos may be shared with the family on Patrick’s tribute page at www.mcclendon-winters.com

Weldon Eugene Willingham
Weldon Eugene Willingham, a resident of Okmulgee, passed away Sunday, August 31, 2014 at the age of 64.
Memorial Services will be held on Wednesday,September 17, 2014 from 4:00 p.m. to 6:00 p.m. at the Cornerstone Foursquare Church 617 N. Oklahoma Ave in Okmulgee.
Arrangements are under the direction of the Jackson Funeral Home and Crematory in Okmulgee.
Friends may send their condolences to www.jacksonfhandcrematory.com

MILDRED C. KURTZ
Mildred C. “Hetty” Kurtz, age 96, and former resident of Bartlesville, Oklahoma, passed away at her home in Tulsa, Oklahoma on Thursday, September 11, 2014.
Mildred C. Hettenhaus was born on May 10, 1918 in Washington, Missouri.  She was the daughter of George  Hettenhaus and Martha (Kessler) Hettenhaus   She was raised in the Washington community where she was educated and graduated from the Washington High School.  She furthered her education by attending St. John School of Nursing, Springfield, Illinois, graduating as a Registered Nurse.  Later, she attended the University of Oklahoma graduating with a Bachelor’s degree and she also graduated from the University of Central Oklahoma with a Master’s degree.  She was a public health nurse in Okmulgee County for 13+ years and she was a coordinator of the School of Practical Nursing at Tri-County Tech in Bartlesville until her retirement in 1983.
In January of 1945, Hetty entered the U.S. Army where she served as an Army Nurse on the island of Guam.  She was an honoree on the Oklahoma Honor Flight to Washington, D.C. in September 2013.
In 1946, Hetty and Leonard Kurtz were united in marriage and this union was blessed with a daughter, Hetty Kathleen “Kathy”.   Hetty was preceded in death by her husband, Leonard, who passed away in 2005.
Hetty was a longtime Episcopalian and a member of St. Dunstan’s Episcopal Church, Tulsa.  She was also a member of P.E.O. Sisterhood, Chapter BE, as well as volunteering with many organizations, especially committees at Montereau in Tulsa.
A memorial has been established at St. Dunstan’s Episcopal Church, 5635 E. 71st St., Tulsa, OK 74136.
Hetty was preceded in death by her parents; her husband; and two brothers.  She is survived by her daughter, Hetty Kathleen “Kathy” Bogie, and her husband, Art, of Hunt, Texas; grandson and granddaughter-in-law, Stephen P. and Beth Rowe; a brother-in-law, Robert Gardner; cousins; and a niece, Janice Runzheimer.
Memorial services for Hetty will be held on Wednesday, September 17, at 2:00 PM in Tulsa, Oklahoma in St. Dunstan’s Episcopal Church, 5635 E. 71st St.
Burial of cremains for both Hetty and Leonard will take place on Thursday, at 10:00 AM in the Ft. Gibson National Cemetery, Ft. Gibson, Oklahoma.  Military honors will be accorded by the American Legion Post #15 Honor Guard, Muskogee, Oklahoma.
Cremation arrangements were entrusted to the Arnold Moore & Neekamp Funeral Home. Bartlesville.  Online condolences may be left at www.honoringmemories.com.


TOMMIE C. HARRIS
Tommie C. Harris passed away September 11th, 2014 in Tulsa at the age of 74. A Memorial service will be at 11:00 a.m., Saturday, September 13, 2013 in Marietta, Oklahoma. Services are entrusted to Integrity Funeral Service of Henryetta. 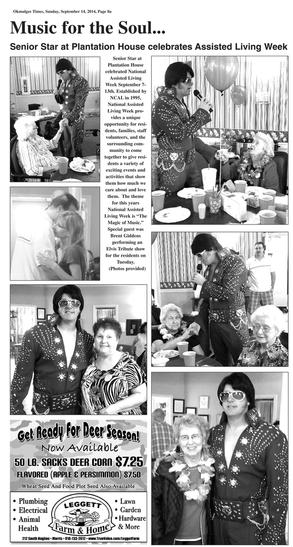 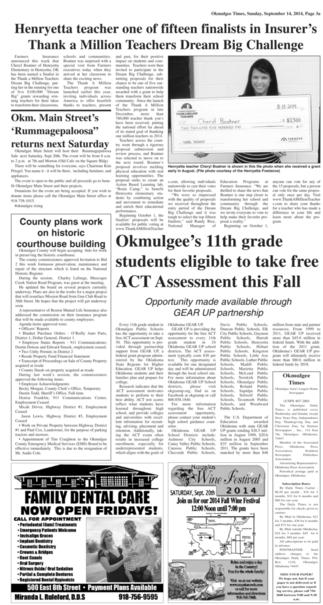 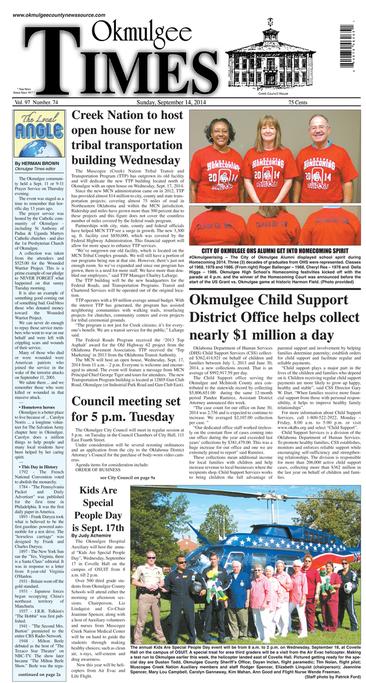 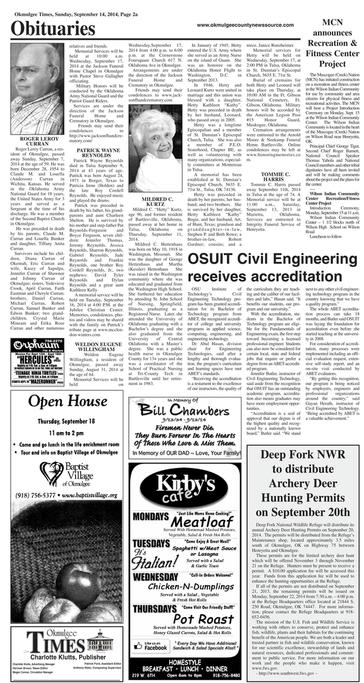 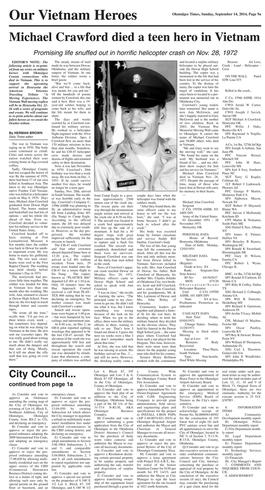