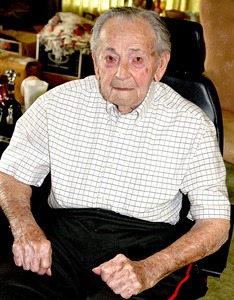 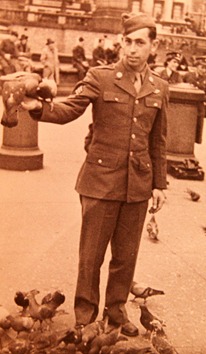 Robert ‘Bob’ Malcolm is a modest man when it comes to his military service.
The retired OSU-IT employee plays down his experiences in World War II. He deflects credit to others who put on our nation’s uniform.
But, make no mistake, Bob Malcolm is no less a hero than his fellow members of the Greatest Generation. He served in the military, followed his orders and carried out his assigned duties.
On this Memorial Day weekend, the Okmulgee Times salutes Bob Malcolm for his service to America.
Malcolm was living in Andover, Kansas, when he was drafted in 1942. Prior to that, he led a normal life in America’s Heartland.
He graduated high school and went to work at the Boeing plant in Wichita. He and his sweetheart, Helen, were united in marriage in May of 1941. They were barely 7 months into their marriage when the nation was thrown into war with Japan. The attack on Pearl Harbor, Hawaii, pulled American into World War II against Japan and Germany.
For Malcolm, it was just a matter of time before be would join the war effort.
His draft notice came a year into his married life. This would change everything for the young man from Andover. He was soon on his way to Kansas City to be inducted into the U.S. Army Air Corps - now known as the U.S. Air Force. He would be trained to manufacture parts and repair airplanes. This vital role would be his mission for the duration of the war.
The new member of the military took his early training in California and Oklahoma City (Tinker Air Force). He also had stops in Albuquerque, New Mexico, and then on to San Antonio, Texas. He later moved on to Virginia before boarding a ship for the Pacific theater.
“I was with the 60th Air Depot Group,” he said. “We had formed in Oklahoma City at Tinker Field. I stayed with the same unit the whole time.”
The 60th Air Depot Group was sent to New Guinea in the Southwest Pacific Ocean. The group later transferred to Biak after the island was taken by the United States after fierce fighting in late May and June 1944. Mokmer Airfield was the main USAAF facility in a complex of airfields built by the Japanese on Biak Island. The other two airfields were Borokoe and Sorido.
“I spent 2 years and 2 months (in Pacific Ocean duty),” he said.
His most vivid war memories came in 1945.
“It was about the end of the war ,” he said. “A couple of those Jap planes flew in and bombed us on Biak. They were (stationed) on the north end of New Guinea. They (Japanese) bombed us and went back. After that, every night we had an alert.”
In 1945, the Allied forces planned an invasion of mainland Japan. This step was deemed necessary to end the war - but would result in the loss of untold American lives. The invasion was averted, however, because of the atomic bombs designed in the ultra-secret Manhattan Project. The A bombs were dropped on and destroyed the major cities of Hiroshima and Nagasaki. Japan quickly agreed to surrender and end the war.
News of the surrender brought a joyous response from around the world. Nobody was happier than the service member from tiny Andover, Kansas.
“I was in Biak when they surrendered,” Malcolm recalls. “Oh, we were pretty happy about it!”
It was over 4 months before Sergeant Malcolm would return to the United States to be processed out of the military.
“We didn’t go back real quick,” he recalls. He was sent to a military post in Denver to be processed out of the military.
When he was finished in Denver, he did not have to hop a train to Kansas.
“My dad, my little sister Pat and my wife Helen came out and got me,” he said.
His father, Lee Malcolm, drove to Denver in his 1941 Chevrolet. However, it took help from friends back in Andover to make the trip possible.
“People gave him gas cards to come out and get me,” he said. “I got home to Kansas on Christmas eve at midnight.”
When he got out of the military, Malcolm took a job in his father’s automobile repair shop on the east side of Wichita.
He would soon be introduced to Oklahoma in a very impressive way.
“I came to Billings, Oklahoma, to build Henry Bellmon’s house,” he said.
For the younger folks, Henry Bellmon was elected Oklahoma’s 18th governor. He went on to serve 2 terms in the United States Senate. Bellmon then came back to Oklahoma and was elected as our state’s 23rd governor.
“My wife was his cousin,” Malcolm said.
From the construction work on the Bellmon house, Malcolm came on down to Okmulgee. He was hired at Oklahoma State Tech to teach automotive and building construction.
“I taught automotive for half a day and building construction another half a day,” he said.
Malcolm retired from the college in 1985. He has remained in Okmulgee and lives at the family residence on 9th street. They are members of the First Nazarene Church.
He and Helen are the proud parents of 4 daughters, with one living in Okmulgee, one in Henryetta, one in Arkansas and one in California. They are also blessed with quite a few grandchildren and great-grandchildren.
On May 17, 2014, Bob and Helen Malcolm celebrated their 73rd wedding anniversary.
As for his own military service, Malcolm does not want to make a big deal of it. However, he is quick to brag on his friend and fellow First Nazarene Church member Clarence Boudinot.
“Clarence Boudinot has quite a story to tell,” he said. “You should do an article on him.”
The Okmulgee Times is taking Malcolm’s advice. We’ll be writing a feature on his World War II experiences to share with our readers.